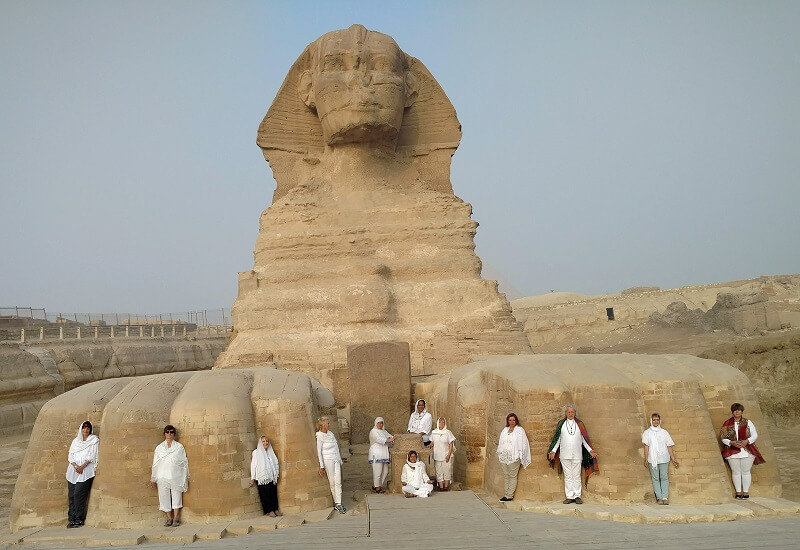 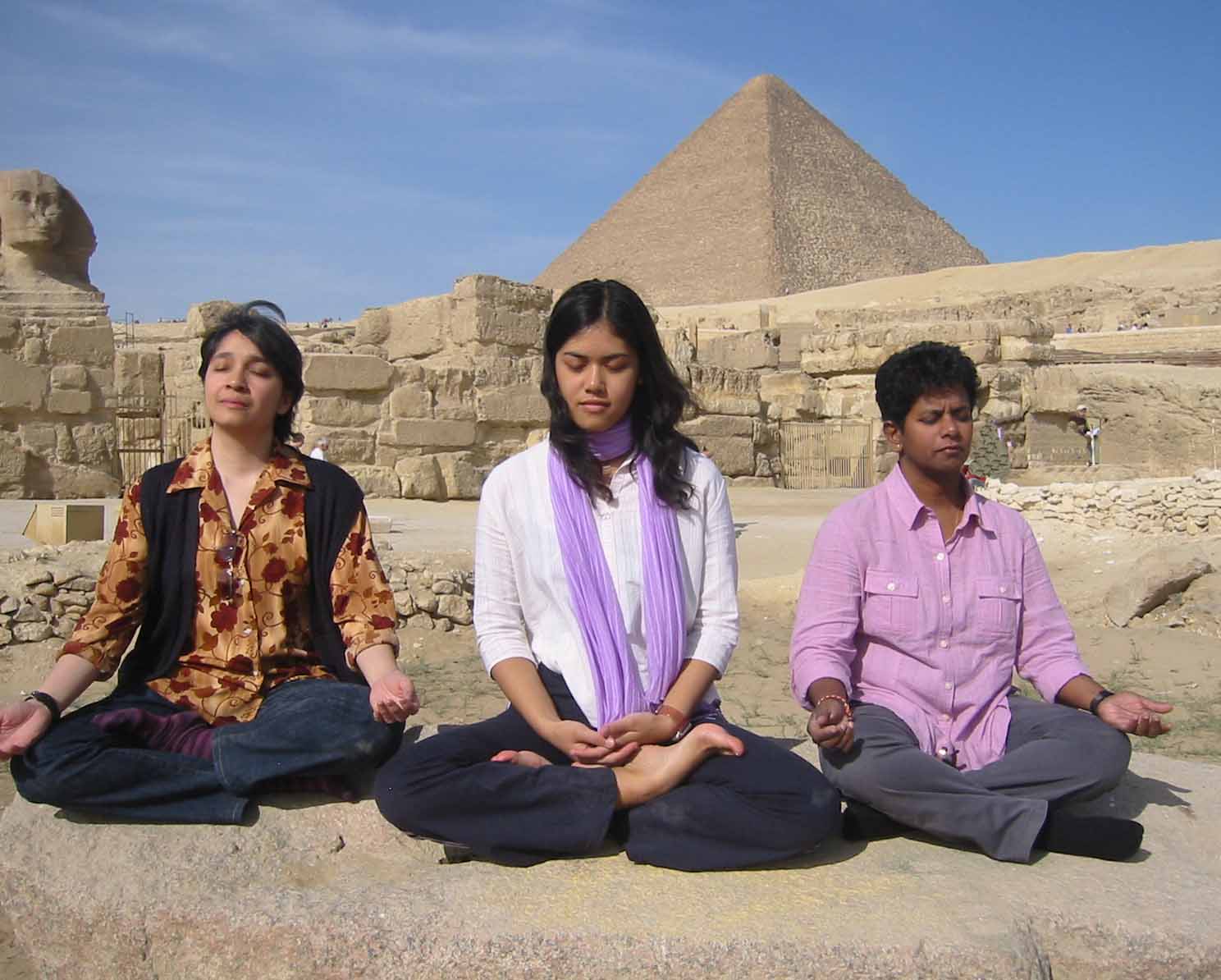 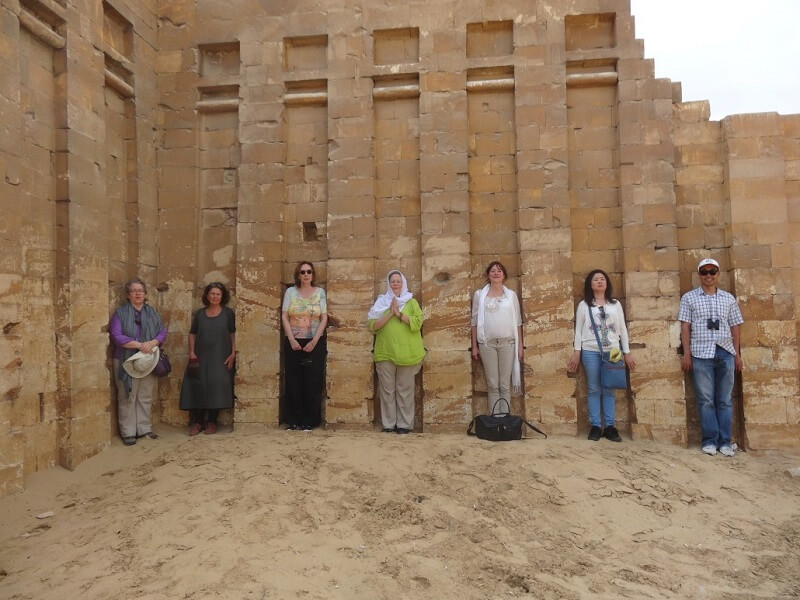 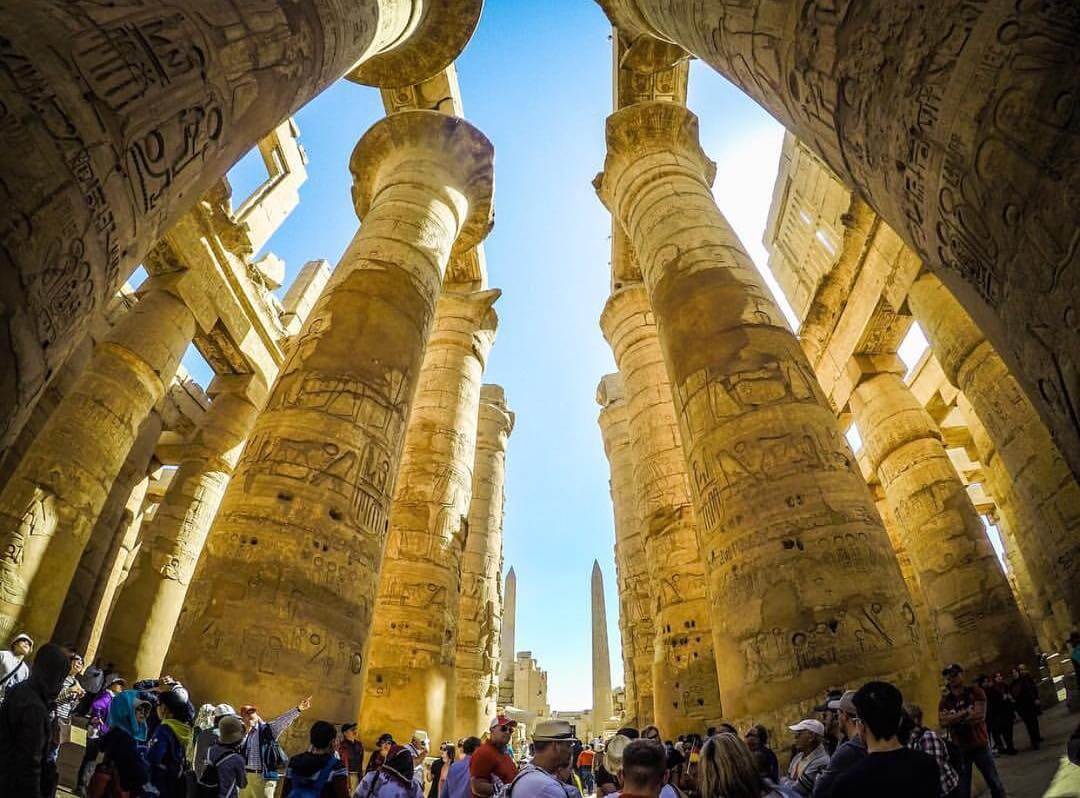 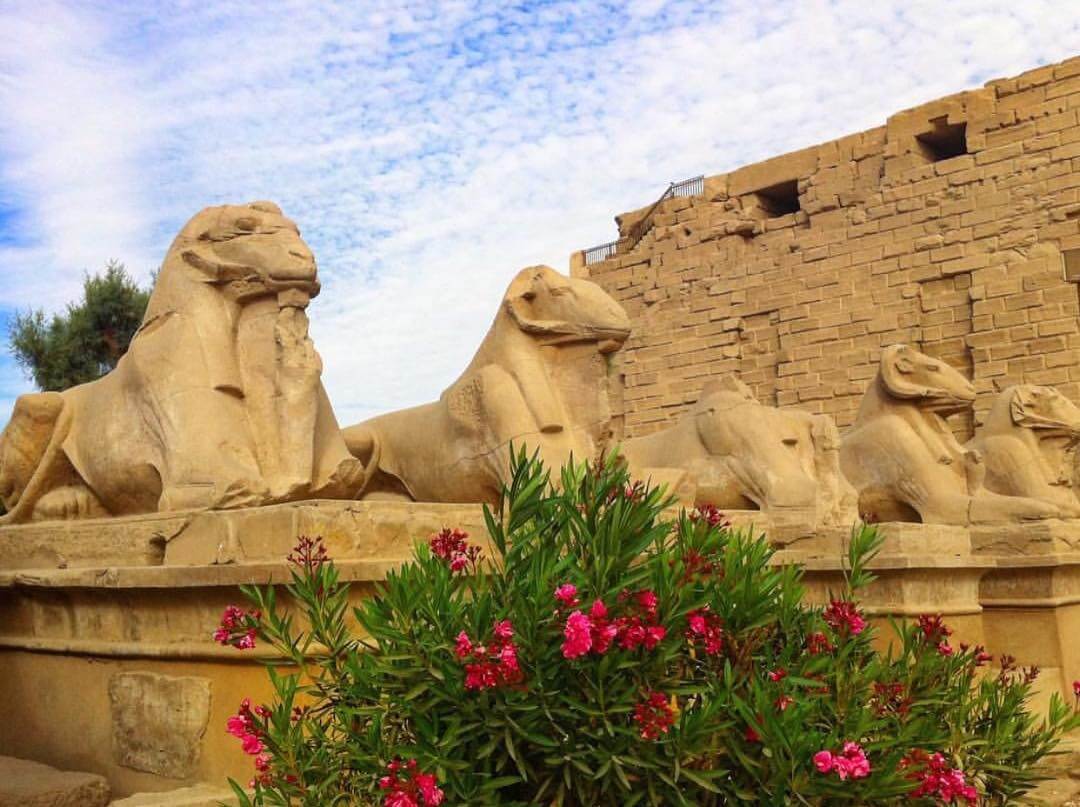 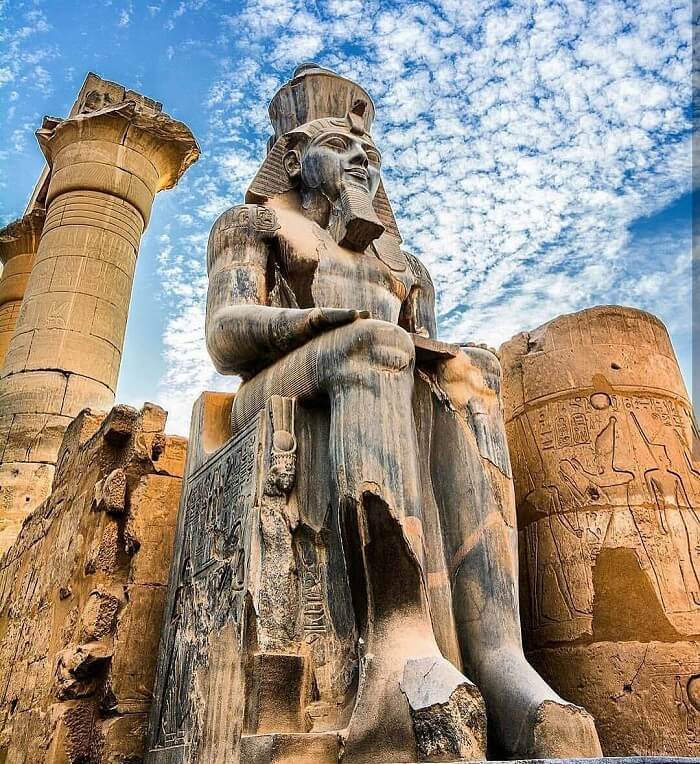 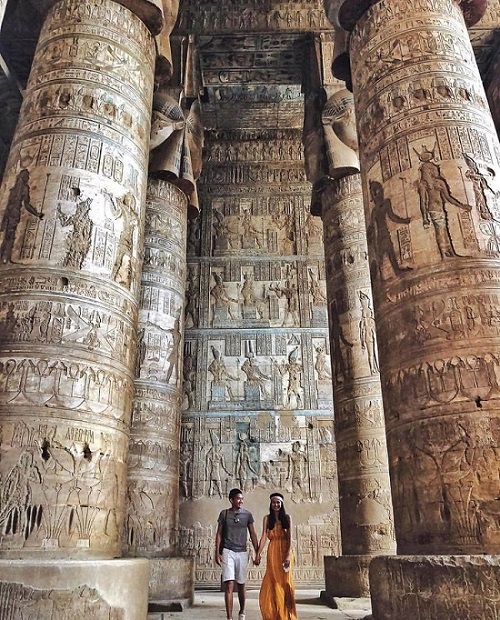 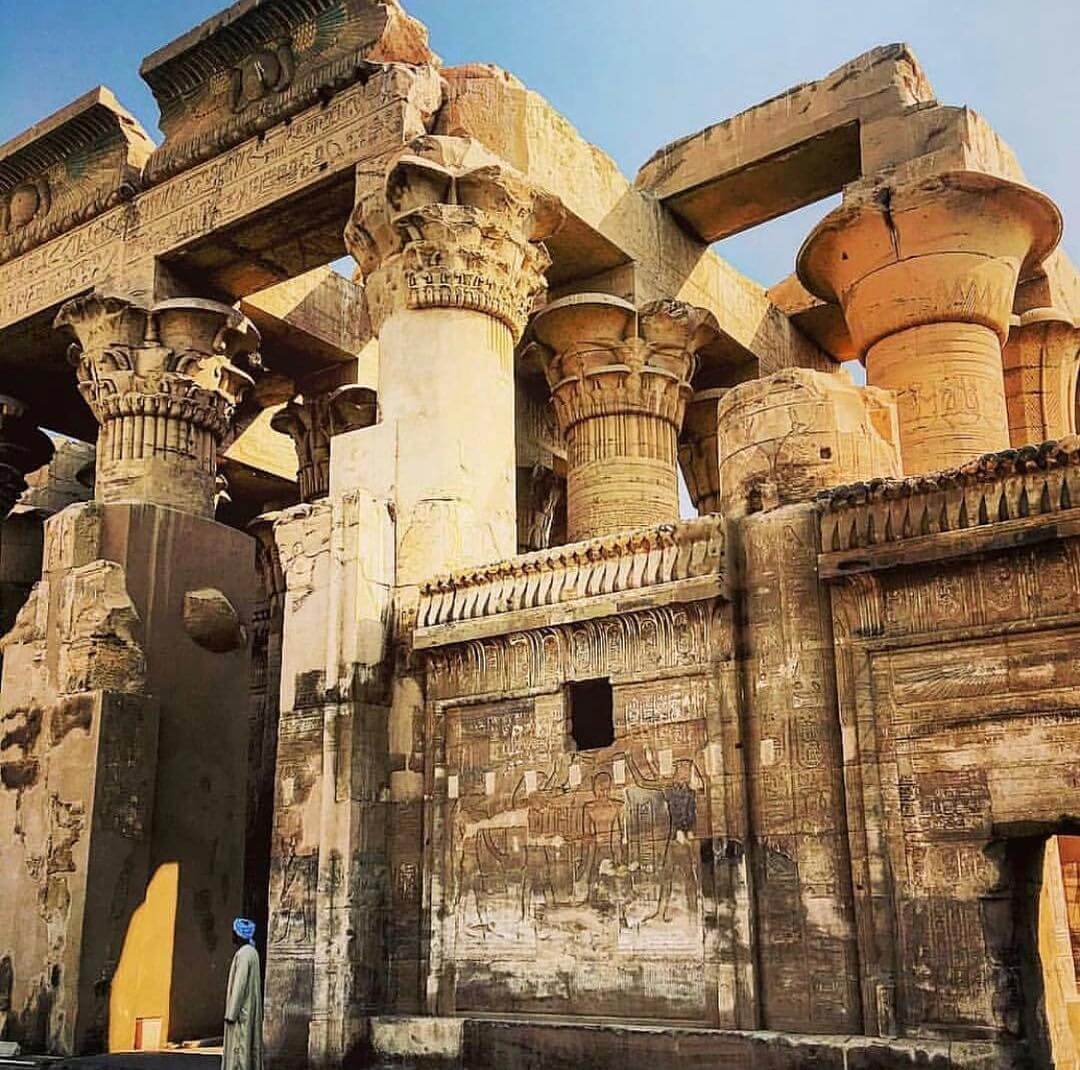 The sense of spiritual connection makes spiritual Egypt tours and vacations increasingly popular, and as many people have already discovered, Egypt provides connections to our collective past that are staggering. Book Egypt Spiritual Tours Now.

A transfer representative will meet you at the airport to assist you with entry formalities, and escort you to the luxurious Le Meridien Pyramids Hotel in Giza, less than 5 minutes from the Giza Plateau, and stunning views of the Pyramids.

After breakfast, we will visit the world famous Giza Plateau. After exploring the area around the Pyramids, we will drive to a higher spot with a beautiful panoramic view of the pyramids and plateau. We will then move to the East side of the pyramids to visit the Valley Temple and the Sphinx.

After lunch we will visit a very popular essential oil store, where you can experience and purchase some of the most fabulous essential oils, many of which you can only find in Egypt.

After breakfast we will drive to Saqqara, home to the Step Pyramid attributed to King Djoser. There we will visit the newly opened "Pyramid of Unas" where we will see the first pyramid text. We will also visit the mythical Serapeum, a huge subterranean complex. We will stop for lunch on the way back to the hotel.

After breakfast, we will drive to Dahshur, where we will visit the Bent and the Red Pyramids, attributed to King Sneferu. Afterwards we will check into the world famous Mena House.

After breakfast we will drive to the north coast of Egypt to the Mediterranean Sea and to Alexandria where we will visit the underground catacombs, the biggest pillar in the world (Pompey's Pillar), and the Roman Amphitheatre. We will then have lunch at a very famous sea food restaurant, and later in the afternoon drive back to Cairo.

After breakfast we drive to El Minya, check into the Minya Horus Hotel, and visit Bani Hassan tombs which date back to the Middle kingdom (2,000 B.C.E). We will then visit the ancient capital of Ahkenaten, now called Amarna.

After breakfast we will leave to visit a very important site of ancient wisdom and knowledge, Hermopolis, located near the small city of Alashmunien. This is the city where the Neter Touth/Thoth was worshipped as an ibis and baboon. He was Hermes (hence the modern name of the city), to the greeks and Trimegistus of the hermetic texts, who was the scribe who presided over all forms of knowledge.

Next we will drive to Tuna El Gebel, the necropolis to Hermopolis. It is best known for the sprawling catacombs at the foot of the western cliffs, where thousands of ibises (dedicated to Thoth) and other sacred animals were buried from the New Kingdom through Roman times. Afterwards we will drive to Abydos and check into our rooms at the House of Life Hotel and Spa

After breakfast, we visit Seti I Temple, the only temple which has 9 holy of holies, and has carvings in some of the best condition found throughout Egypt. The ancient pilgrimage site of Abydos houses the Temple of Osiris and the very ancient Osirion Temple, rumored by the some of local people to be 35,000-50,000 years old. After lunch we will be driven to Luxor and check into our hotel.

After breakfast, we drive to Dendera to visit the incredible Temple of Hathor. Here we will see a replica of the famous "Dendera Zodiac" where one of the first depictions of the zodiac is found, (the original from the site in now in The Louvre), which points to the ancient origins of astrology and superior knowledge of our solar system. The Temple of Hathor is considered one of the most breathtaking sites in all of Egypt, and an example of one of the most beautiful restorations of hieroglyphs one can see. After we will drive back to Luxor and our hotel.

Next we're off to the mystical Mortuary Temple of Hatshepsut, a beautiful work of architecture by Senemut, believed by some to be her lover. Hatshepsut, meaning "foremost of noble ladies", is considered the second historically confirmed female pharaoh after Sobekneferu. The temple dedicated to her and built in a half circle of cliffs has been described as one of the greatest Egyptian architectural achievements. After we stop at the Colossi of Memnon, we will check into our rooms on the luxurious 5 star Nile Cruise Ship and enjoy a buffet lunch.

Later on in the evening we will have an evening visit to the spectacular Luxor Temple. The amazing Luxor Temple: This complex might be the greatest testament to why Luxor has earned its nickname, "The World’s Largest Outdoor Museum". The temple is one of the best preserved of all of the ancient monuments with large amounts of the structure, statuary and relief carvings still intact, making it one of the most impressive visits in the Luxor area and all of Egypt. Luxor Temple, along with the temple complex of Karnak, are the most famous temple complexes around Luxor and they are both located on the East Bank of the Nile. In ancient times an avenue of sphinxes that ran the entire 3 kilometers between them to connect the two sites. This avenue is currently under excavation, but the section nearest to Luxor Temple has already been restored.

After an early breakfast, we will visit Karnak, the world's largest temple. There we will see so much evidence of ancient technology being used to construct this site. This was one of ancient Egypt's grandest and most ambitious building projects. its multiple temple buildings are monuments to a list of pharoahs who all wanted to stamp their mark on their kingdom's most revered religious sanctuary. This was the house of the gods, and its glories were to be feted by all.

We will also visit places which are rarely visited by tourists, like the very powerful Chapel of Sekhmet, and the newly opened precinct of Mut, one of the four main temple enclosures that make up the Karnak Temple Complex.

After breakfast a day tour to the Temple of Edfu, where you will visit the majestic temple dedicated to Horus, and relax with an afternoon of sailing. After lunch we will stop at Kom Ombo, where we will visit the twin temples dedicated to the crocodile Neter Sobek, and Horus the Elder.

After breakfast we will take a motorboat to the enchanting Island of Philae, and the powerful Temple of Auset (Isis). Auset is associated with the ancients' most highly revered star, Sirius. The annual rising of Sirius was synonymous with the flooding of the Nile River, which left huge deposits of silt, the very valuable black earth or "KMT" (Khemit) for which Egypt was named. Auset is usually depicted wearing the throne, or "seat of power", reflecting the matriarchal nature of the very ancient civilization.

Then we will explore the famous Aswan Quarry that is home to the 1,200 ton Unfinished Obelisk, that only a handful of cranes worldwide could lift today, and other significant evidence of higher technologies used by the ancient Khemitians.

After lunch we will sail by motorboat to Elephantine Island where we will experience the unique and powerful energiesof this location; while also visiting the temple of the Neter Khnum, who was the maker of the "Ka".

In the morning we will have the opportunity to visit the beautiful Abu Simbel Temple, the rock cut temple in the depth of the Nubian land. After lunch we will fly back to Cairo.