Whether you approach Kerak from the ancient Kings Highway to the east or from the Dead Sea to the west, the striking silhouette of this fortified town and castle will instantly make you understand why the fates of kings and nations were decided here for millennia.

An ancient Crusader stronghold, Kerak sits 900m above sea level and lies inside the walls of the old city. The city today is home to around 170,000 people and continues to boast a number of restored 19th-century Ottoman buildings, restaurants, places to stay, and the like. But it is undoubtedly Kerak Castle that dominates.

The town is built on a triangular plateau, with the castle at its narrow southern tip. The castle is some 220m long, 125m wide at the north end, and 40m wide at the southern end where a narrow valley deepened by a ditch separates it from the adjoining and much higher hill – once Saladin's favorite artillery position. Throughout the castle, dark and roughly-shaped Crusader masonry is easy to discern from the finely-crafted blocks of lighter and softer limestone used in later Arab work.

While the castle we see today essentially dates back to the 12th century, Kerak has been a fortress since biblical times. The Bible relates how the King of Israel and his allies from Judah and Edom ravaged Moab and besieged its king Mesha in the fortress of Kir Heres, as Kerak was then known.

Centuries later, it took the Crusaders some twenty years to erect their vast castle. Once finished in 1161, it became the residence of the lord of Transjordan, by then the most important fief of the Crusader kingdom, rich in produce and tax revenues. After withstanding several sieges in the early 1170s, Kerak came under the rule of Reynald of Chatillon, a lord who became known for his recklessness and barbarism. Breaking all treaties, he began looting merchant caravans and Mecca-bound pilgrims, attacked the very homeland of Islam – the Hijaz – and raided Arabian ports on the Red Sea, even threatening Mecca itself. Saladin, the ruler of Syria and Egypt, reacted swiftly. He took the town of Kerak by force, burned it down and almost managed to storm the castle as well.

Reynald’s peacetime robbery of a large caravan in 1177 prompted fast retribution from Saladin - who attacked the Crusader kingdom – ending in the defeat of the Crusader army at the Battle of Hattin. Saladin spared most of the captives except Reynald, who he executed himself. The defenders of Kerak held out for eight months in a prolonged siege before surrendering to the Muslims who, mercifully, allowed them to walk free.

Once again in Muslim hands, Kerak became the capital of a district covering much of Jordan, playing a central role in Middle Eastern politics for the next two centuries. For a time, Kerak even became capital of the whole Mameluk kingdom when Sultan an-Nasir Ahmad grew weary of power struggles in Cairo. Indeed, it took eight separate sieges before his brother and successor as-Salih Ismail took the fortress and returned the royal insignia. It was during these sieges that Kerak had the dubious honor of being the first target of modern artillery in the Middle East, as-Salih Ismail making use of cannons and gunpowder.

Under the Ayyubids and early Mameluk sultans, the castle was substantially renovated and the town’s fortifications strengthened with massive towers but seemingly no gates – access to the town was through subterranean passages with entrances still visible today.

In later times, the town more often than not become a refuge for rebels, while the castle was used as the gathering place of tribal councils. Firm Turkish administration was enforced after 1894 and the Mameluk palace inside the castle was used as a prison. The Great Arab Revolt dealt the last blow to Turkish rule, which ended in 1918. 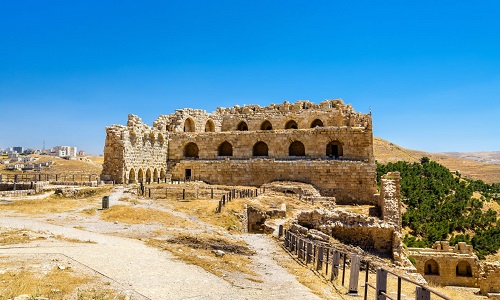 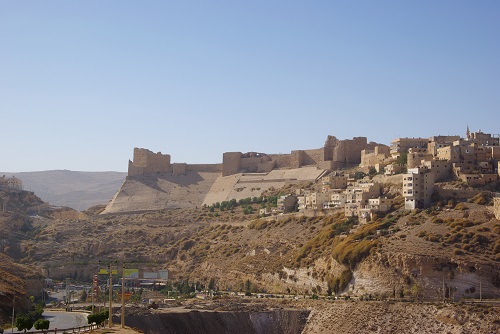 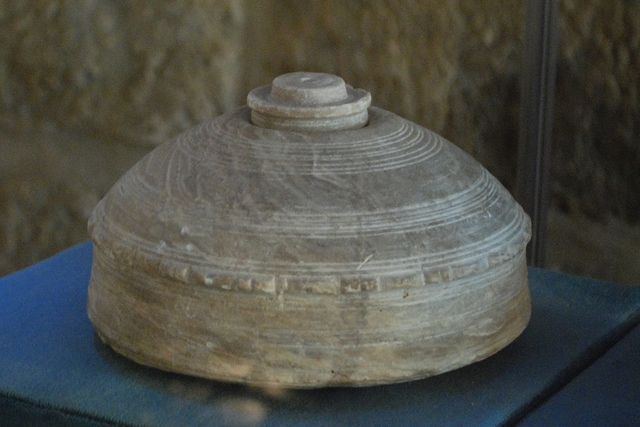