Visit all the top attractions in a single tour. Five Days, six destinations; your passport to an unforgettable journey of discovery.

From the Pyramids of Giza in Cairo, to the massive rock cut temples of Abu Simbel. Visit the tomb of King Tutankhamen in the Valley of Kings near Luxor, and explore sites of antiquity that you'll never forget. 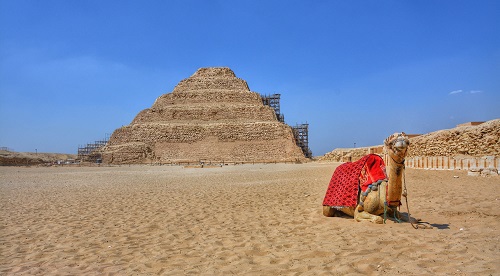 Your Egypt tour begins at your chosen hotel in Cairo. Upon arrival to Cairo Int. Airport, you will be met with our English-speaking representative who will help and assist you in all formalities.

Then you will be met by our English Egyptologist tour guide to start your first day tour by visiting Pyramids of Giza "Khufu, Khafre & Menkaure", where the greatness has been embodied in three pyramids with a limestone statue of Sphinx guarding the whole area.

Then proceed to one of our local restaurant to have your lunch. After that you will proceed to the city of Sakkara, where you will be so excited by exploring The Step Pyramid of king Djoser. This pyramid has a very nice story, when king Djoser asked his chief Architect Imhotep to create something different, so that the king could be buried at. As a result the well-known Architect creates the Step pyramid, which surprised the king so much since it was considered to be a new achievement in this period.

After finish your day tour, you will transfer to your hotel for check in & overnight Cairo.

Breakfast box from your hotel in Cairo and check out, then our representative will transfer you to Cairo airport to fly to Luxor.

Upon arrival to Luxor airport, you will be met with our English-speaking representative who will help and assist you in all formalities.

Then start your magical tour in Thebes, the sacred land by exploring the wet bank of Luxor including Valley of the Kings, which considers as the royal cemetery of the Theban kings and rulers of ancient Egypt, and the place where our Pharaohs were buried. "Enter tomb of King Tut Ankh Amun" After that, you will proceed to visit Haowrd Carter house, visit the home that once belonged to the man who discovered the tomb of King Tut.

Then proceed to visit Temple of Queen Hatshepsut at Deir El Bahari. This temple is considered as one of the most wonderful examples of the Architecture in ancient Egypt, because it was totally carved inside the mountain. At the end of the tour you will visit Colossi of Memnon, which is belonging to king Amenhotep III. Lunch at local restaurant.

Then, you will discover the East bank of Luxor including Karnak Temples Complex, which are the largest structures ever build in the history of the mankind. The principal building is that of god Amun Ra, since it was considered the house of god on the earth, the earlier structure date back to the middle kingdom, but there are some references which refer to the earlier buildings as old as the 3rd dynasty.

Later on, you will proceed to visit Temple of Luxor, which was built by one of the kings of the 12th dynasty and completed by the well know king Ramses II. This temple was located in the heart of ancient Thebes and, like Karnak, was dedicated to the main/chief god Amun Re.
After finishing your day tour, you will be transferred to your hotel in Luxor for check in & overnight Luxor.

Breakfast at your hotel in Luxor and check out, then our tour guide will pick you up from your hotel to enjoy a day tour to the Temple of Edfu , where you will visit the majestic temple dedicated to Horus which is considered by most to be the best preserved cult temple in Egypt. According to the Egyptian myths, it was the place where the falcon-headed god Horus revenged the murder of his father Osiris by killing Seth.

Arrive Aswan city and lunch at one of our local restaurant.

Then discover the great city of Aswan, including The High Dam, which has been erected by the Egyptian president Gamal Abdel Nasser in 1960 AD to protect Egypt from the Nile flood. After that you will enjoy sailing on the Nile River by a motor boat till reach Agilika Island, where you will visit Temple of Philae, which was erected during the Greco-Roman period and was dedicated to goddess Isis (mother of god Horus).

After finish your day tour, you will transfer to your hotel in Aswan for check in & overnight Aswan.

Breakfast box from your hotel in Aswan and check out. Then, you will be transferred by private A-C van to Abu Simbel. The original site was known as Meha in the ancient times and was first documented in the 18th Dynasty, when Ay and Horemheb had rock-cut chapels hewn in the hills to the south.

Then we will transfer you to Aswan airport to fly to Cairo. Arrive Cairo airport and transfer to your hotel, overnight Cairo.

Breakfast at hotel and check out. Then our English speaking guide will meet you at the hotel to accompany you to start your day tour in Cairo.

Your tour today is completely different and more excited, as the best of our monuments are awaiting you. Start your tour with The Egyptian Museum, which is considered to be one of the most important museums in Egypt housing the Pharaonic monuments including those of the well-known king Tutankhamen. Lunch meal at one of our local restaurant.

After finishing your day tour,  our representative will transfer you to Cairo international airport for final departure.